Note to myself: today Dickie Bush reminded me of the Pixar Storytelling framework. I'm going to try rewriting this post that way to see if it's any better at telling the story.

Today's paper is WebGPT: Browser-assisted question-answering with human feedbac. When I think about thow we can build a bicycle for the mind, I've been wondering how machine learning can help and mused about as much while wondering if it is possible to create a Tim (Urban)-In-A-Box. More important than summarizing or finding information is getting you to read that summary.

There are a number of things that I learned in this paper. First is that there is a high quality dataset, ELI5 sourced from the popular sub-reddit that contains a list of questions and answers "explained like I am 5 years old". 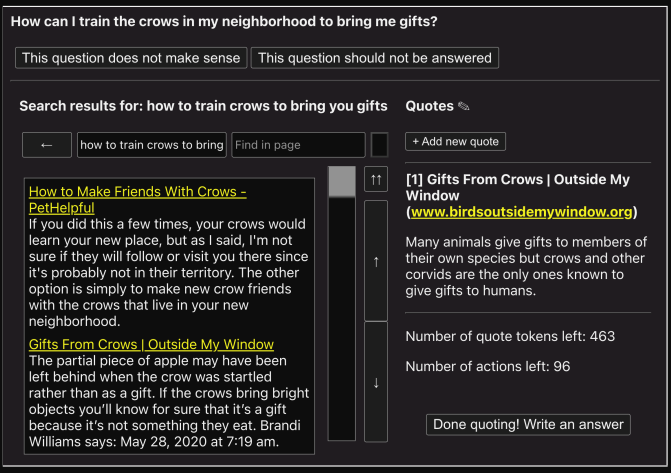 I learned about crows

But if I rely on beer mode activities to drive my research, it's going to be pretty random. And since there isn't anything that tries to tie together the things that I have seen on a particular topic, my poor brain is left to fend for itself. So it sees input that looks something like:

But one day, I thought: why don't I get my machines to go do the heavy beer mode activity of sifting through the Internet and return me something that I could read without distractions, preferrably written in a Tim Urban style? Just how far-fetched is this idea? Turns out, we're getting closer by the day.

On December 16, OpenAI announced WebGPT, which is a fine-tuned version of GPT-3 that answers open-ended questions by searching for and summarizing what it finds online. Unlike GPT-3, WebGPT augments what is already known in its language model with results obtained by searching the web using the Bing search API.

The results from the model are pretty interesting. When posed the question: "How do neural networks work?", WebGPT responded with:

In its most basic form, a neural network has two layers: an input layer and an output layer[3]. The output layer is the component of the neural network that makes predictions[3]. In a feedforward network, information flows through the network in the following way: patterns of information are fed into the network via the input units, which trigger the layers of hidden units, and these in turn arrive at the output units[1]. The network learns by a feedback process called backpropagation, which involves comparing the output a network produces with the output it was meant to produce, and using the difference between them to modify the weights of the connections between the units in the network, working from the output units through the hidden units to the input units, going backward[2][4]. Over time, backpropagation causes the network to learn, reducing the difference between actual and intended output to the point where the two exactly coincide, so the network figures things out exactly as it should[2].

This is pretty reasonable! It even generated references:

The linked paper provides a lot of additional details. First, the experimental environment (used by humans recruited via UpWork) is a text-based web browser. Here's a screenshot of what it looks like:

The text based browser was designed to be used by human participants, and did a lot that a conventional browser does not typically do to make it easier to work with the text. It uses a number of existing libraries, including:

to transform the text into a format that was suitable to feed into the model. The browser was used to collect two additional pieces of data from the study participants: 1) demonstrations of humans using search to answer questions, and 2) comparisons between two model-generated answers to the same question.

The model itself was trained to answer questions from the ELI5 dataset that was gathered from questions and answers in the "Explain Like I'm Five" subreddit.

Until finally the glorious day arrives when I can ask a question like:

Have Tim Urban write an explainer for What is Neuralink and why do we need it?

And I get an answer like this amazing 38,000 word explainer for my question. Or if I'm more in the mood for something more succinct:

Give me a Wikipedia summary for What is Neuralink and why do we need it?

But will it make any difference? Will it actually make people smarter? Think better? Will this insulate us from the endless distraction that is the internet?

Maybe what we need is an assistant that filters the web for us but in a way that doesn't reinforce existing biases? I should write about that some other time.

TIL that UNIX: A History and a Memoir was written by Brian Kernighan and available on Kindle as an e-book.