Joe Rogan, Robert Malone and the history of mRNA vaccines🔗

It's worth listening to.

Apparently he was one of the first people to observe protein transcription following in vitro insertion of mRNA encapsulated inside of liposomes. Here's an excerpt of his graduate student lab notebook from the day of that observation: 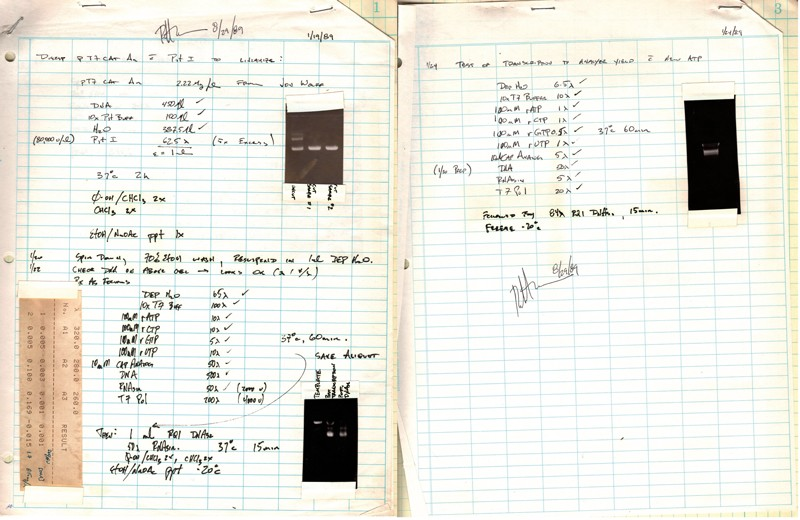 Many other scientists are highlighted, including Katalin Karikó, who pioneered modifying mRNA using pseudouridine to suppress immunological response towards it. Pieter Cullis who made key contributions towards developing lipid nanoparticles that are an essential piece of technology that enables safe delivery of mRNA into human cells.

So what does all of this have to do with Joe Rogan again? He was accused of bringing contervailing opinions onto his show and giving them a platform. However, it's worth remembering that scientific progress does not progress in the idealized straight line seen in the diagram above. There are many twists and turns, and occasional reversals of course. Sometimes what was accepted as dogma at one point in the past winds up being known to be false today.

There's a story that Ingmar Hoerr tells about the time when he presented his early mouse data on direct injection of mRNA:

In fact, this entire field was woefully underfunded precisely because it was outside mainstream science in the 2000s. What if funding for this field never happened?

The solution to people saying things that are contrary to the mainstream belief is not to censor them. Rather, we should combat that by, as Ben Thompson says, using more free speech. There's a lovely quote from Ben's article that I'm reproducing below that cites John Stuart Mill's On Liberty (from 1859):

If all mankind minus one, were of one opinion, and only one person were of the contrary opinion, mankind would be no more justified in silencing that one person, than he, if he had the power, would be justified in silencing mankind. Were an opinion a personal possession of no value except to the owner; if to be obstructed in the enjoyment of it were simply a private injury, it would make some difference whether the injury was inflicted only on a few persons or on many. But the peculiar evil of silencing the expression of an opinion is, that it is robbing the human race; posterity as well as the existing generation; those who dissent from the opinion, still more than those who hold it. If the opinion is right, they are deprived of the opportunity of exchanging error for truth: if wrong, they lose, what is almost as great a benefit, the clearer perception and livelier impression of truth, produced by its collision with error.

Joe admits as much in his Instagram post. He says he will try to ensure that other opinions are presented on his show in close proximity to the "controversial opinions". And even if he doesn't, Joe Rogan is hardly the only platform on the Internet.